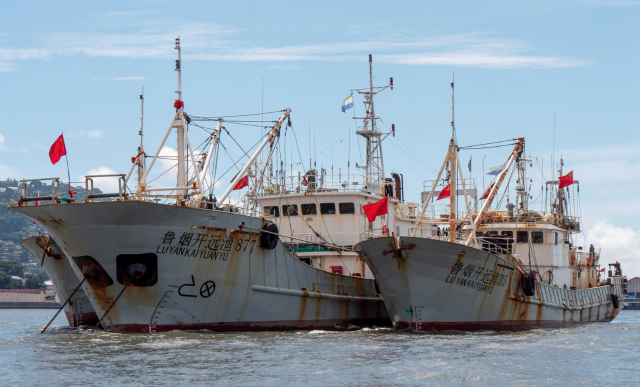 If Donald Trump didn’t have other things on his mind, here is a story that would make even him an environmentalist.  The Chinese global fishing fleet, the largest in the world, is much larger than we thought.  It is larger than even the Chinese believed and it is four times larger than the Chinese government says it wants it to be.  The Chinese distant water fleet numbers at least 12,490 vessels and nearly 17,000 vessels are estimated to have the capacity to fish beyond China’s national waters.  The implications for the world’s ocean are worth reflecting upon this World Oceans Day.

We knew China was the world’s fishing superpower but the new figures compiled by researchers for the London-based Overseas Development Institute, show that the Chinese fleet is vastly in excess of the 3432 vessels it was assumed to be in 2014.  Trawling – one of the most destructive of activities – accounts for the largest number of vessels in the Chinese fleet and the largest number of those vessels are in the North West Pacific. The most intense activity is squid jigging in the Southeast Pacific and the Southwest Atlantic.  Perhaps the most disturbing aspect of distant water fishing, though, is that it competes with the interests of local people in developing countries.  The impact of the Chinese fleet upon Africa is frankly shocking.

The largest registry of Chinese vessels outside China is in Ghana, with 137 ships according to ODI. Virtually all the trawlers in Ghana are Chinese and the trawler agents – the people who profit from arranging the sale of licences to fish – are MPs.  Yet in Ghana, over two million local people depend directly or indirectly on marine fisheries for income or employment.  The incomes of artisanal fishermen have fallen by 40 per cent since the turn of the century, according to the ODI report.  There is a growing tide of criticism on social media of the damage Ghana’s politicians are doing to their own country.

It is a similar story in the nine countries of West Africa, where according to World Bank figures, there were 602 foreign trawlers in 2018, 78 per cent of them Chinese.  It should always be said that the EU and Russia were there before the Chinese came, behaved badly first and nourished the system of trawler agents who do deals with ministers behind the backs of their ministries and scientific advisors.  Russia has a fleet of seven factory ships working right now in Guinea Bissau, widely regarded as a narco-state and this is thought to be taking more sardinella than has been allocated to the country’s local fleets by the regional fisheries science body.  Sardinella is one of the small pelagic fish that people depend for protein in West Africa.

The uncomfortable fact the world now has to deal with is that the greatest impact on the world’s supplies of fish is now exerted – not very responsibly – by a Chinese fleet of 12,490 vessels, which compares with the European Union’s distant water fleet recorded as 289 vessels in 2014 and the United States with 225 large distant water vessels in 2015.  The latest figures show just how much of a challenge China faces in limiting its fleet to 3000 vessels, as it promised to do by 2020 at world trade talks in 2017.

The most recent Chinese move was in Senegal, where local fishing interests wrote an open letter to the President protesting against proposals to grant licences to more than 50 Chinese trawlers to fish under the Senegalese flag.  Some 600,000  people depend on the dwindling resources of Senegal’s continental shelf.  The 50 Chinese vessels, the letter pointed out, would be fishing the same fully and over-exploited resources such as sardinella, horse mackerel and bottom-living species such as hake.  The most recent scientific assessment recommends catches of 3000 tonnes of hake, of which 1,750 tonnes have already been granted to the European Union under a controversial “partnership agreement.”  The Senegalese fisheries minister turned down all 50 trawler licences at the weekend in a move that one must hope will start a regional trend.

The great West African upwelling, which brings nutrients up from the depths along a wide continental shelf, still produces catches of 440,000 tons a year for foreign fishing vessels, which at the quayside is worth $1.2 billion.  The sad fact is that the traceable revenue that foreign vessels bring to the nine countries is less than 4 per cent of this value.  Payments for fishing licences may boost the income of gold-chain-wearing, Range-Rover-driving trawler agents in West African capitals, but they bring little or no benefit to local people.  The impact upon local fishing communities of this fishing from foreign fleets drives migration across the Mediterranean – so the EU should care more about it.

Yet this foreign fleet, which takes the best fish, gets through $280 million a year’s worth of fuel – according to one fisheries expert’s calculations – which is likely to mean it is heavily subsidised.   The bunkering of Chinese trawlers is done by offshore vessels –  a sure sign – which also keeps that money out of local economies.

Tragedy looms for fish stocks and African fishing communities unless African politicians learn to say no to foreign trawlers.  A hundred million people depend on the protein from small pelagic fish such as sardinella, fished by 330,000 local fishermen.  But the amount of small pelagics in the catches of the foreign trawlers has risen to 75 per cent of the catch because they have caught nearly all the bottom fish.

It will in the end be a tragedy for the Chinese trawler skippers, too, who already complain they are not making money because there are not enough fish.  A friend asked: what will you do, go on fishing until you catch the last fish, like you did in the Yellow Sea?  The Chinese skipper nodded and said: yes, we do not have the money to go back to China.