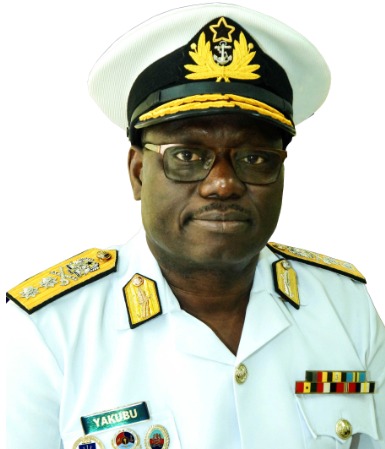 Tension is brewing among officers of the Ghana Armed Forces (GAF) and the other security officers following the release of an audio recording seeking to downplay their contribution to national security.

This time around, the audio that has since been a subject of public discussion captures Rear Admiral Issah Yakubu, Chief of the Naval Staff of the Ghana Navy telling his ‘Men’ that they deserve a pay rise because they face bullets when the other security officers are ‘running’ away.

“…this last one [salary increment] we have been negotiating, it’s been difficult because of our own selves. We talk too much. When we got that increment, people went talking then the Police came they also want; Immigration came; Customs came” he said.

The Senior Navy Officer insisted: “they now think they are soldiers, anything we are doing, they forget that we have put our lives on the line and that when the bullets come, while they’re running away, we will be running towards the bullets.”

Rear Admiral Issah Yakubu in an obvious attempt to court public disaffection for officers of the GAF stated that when the increment is finally paid, the officers will need a wheelbarrow to cash their monies from the bank.

“I have been in meetings and this is being taken seriously and very soon, I tell you, we will all smile, I tell you, you will need a wheelbarrow to go to the bank “ he assured.

The comments of the top-ranking Navy Officer come at a time when public sector workers are agitating for better conditions of service.

But Rear Admiral Issah Yakubu speaking to Officers at an event in Lebanon stated that the “government is well aware that in the past two years or so we haven’t seen any (increment) this is because the Armed Forces agreed with the Fair Wages and Salaries Commission to negotiate our salaries every two years.”

He recalled that “the last negotiation we did, I want to believe we all saw significant increase, the average was about 76 percent which was far higher than any other public organization in Ghana.”

He contended that this time, negotiations for the pay rise in his words “wasn’t easy” because the problem was that “they say when they give it to us, then it puts pressure on the other security services, that is why we refused to take the annual increment of 5 percent, 10 percent, we thought was not good for us.”

Rear Admiral Issah Yakubu further explained that GAF has agreed with Fair Wages for the two-year review indicating that “we look at our Service in general so that the percentage should go skyrocketing”.

He informed the gathering that the Minister of Finance, Ken Ofori-Atta has also been educated on issues about their pay increase.

“…And when we were negotiating, the Finance Minister said he was not aware that we were not taking the annual increment, but now he has been educated on it; that is where the problem was, now Finance has agreed and very soon we will all be smiling,” Rear Admiral Issah Yakubu noted.

Arguing that he cannot give figures as to the quantum of increment, the Senior Sailor was positive that “very soon it will be announced to all of us when the final approval is given but we have scaled all the obstacles in terms of that.”