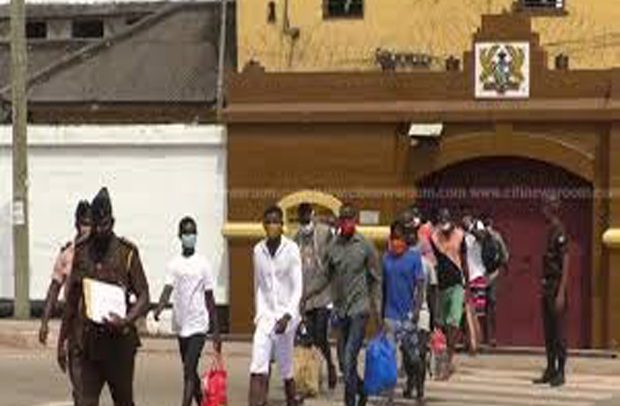 DGN Online has gathered that inmates at the Sekondi Central Prisons in the Western Region staged a protest last Friday against what they described as ‘the small quantity and poor quality of food’ served them daily.

The inmates therefore boycotted the food served them on Friday morning amidst chanting of war songs in the prison yard.

They indicated that they were also human beings and for that matter deserved to be served with enough quality and delicious food.

Confirming the protest by the inmates in an interview with journalists, DSP Netser Adjettey, Public Relations Officer (PRO) of the Sekondi Prisons said a misunderstanding led to imates’ action on Friday.

He explained that the government of Ghana for years has been paying GHc1.80 per each inmates in Ghana’s prisons for their daily feeding.

He said the Sekondi prisons was originally built to contain 400 inmates but currently there are over 600 inmates in the Sekondi Prisons adding “So overcrowding is a major challenge”.

“So you can imagine, if we have to feed over 600 inmates with an amount meant for 400 inmates”, he added.

He said on Friday the inmates expressed their displeasure about the small quantity and poor quality of the food they are given on daily basis and also about their poor living condition.

“Subsequently, the inmates protestested and refused to eat the food given them in morning of last Friday”, he noted.

He, therefore, called on families, religious and other organizations to support the inmates with food items to complement what they purchase with the money from the government.

DSP Netser Adjettey said the prison officers later engaged the inmates to explain the issues to them before calm was restored.

“Meanwhile, we have put lots of measures in place to help avoid such protests in the yard in future”, he assured.