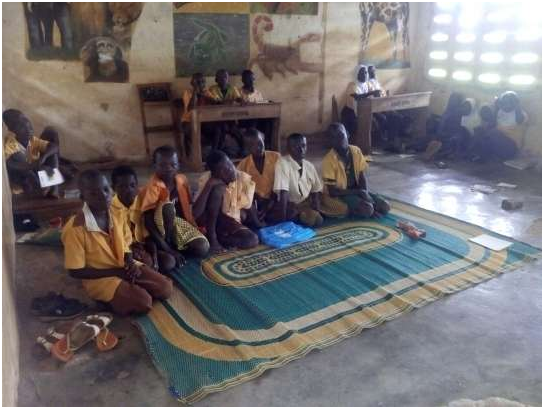 Mr Haruna Yahaya, Secretary of Kpano E /A Primary School Parent Teacher Association (PTA) in the Savelugu/Nanton Municipality has bemoaned the deplorable state of the school, which needs urgent support.

He said there are two classroom blocks with three rooms in each and located at different parts of the community, which was also affecting teaching and learning.

Mr Yahaya made this known at Kpano during a focused group discussion, when officials of the Ghana Developing Communities Association (GDCA), a Tamale NGO led a group of media practitioners to the community.

The mission of GDCA to the community was to assess the educational situation in the community and to find out areas that they could offer support.

Mr Haruna said since the school’s infrastructure was dispersed with a wider distance, children in the lower classes, which is located in the middle of the community often, run home.

He explained that the community realised the need for education and therefore contributed to construct the lower primary block in 1996 and later had the support from GDCA to build the upper primary block.

He lamented that pupils in the lower primary sat on the floor during lessons due to lack of furniture whiles those in upper primary used mats provided by the community.

Mr Inusah Alabira Ibrahim, the headmaster of the school said academic performance was not encouraging because teachers travelled far distances each day to school.

He said the school feeding programme introduced by the Catholic Relief Services (CRS) had stopped for unknown reasons and pleaded for its re-introduction to get the children back to the classrooms.

He expressed worry about the sweating of teachers and pupils on account of poor ventilation in the classrooms and appealed for the extension of electricity into the classrooms.

Alhaji Abdullah Mohammed, the Savelugu/Nanton Municipal coordinator for the empowerment for life programme called on the government to take steps to support the community to improve teaching and learning.

He said Kpano was one of the communities that the empowerment for life programme implemented by the GDCA covered and however, appealed to government to provide furniture and construct a three-unit classroom block to improve teaching and learning