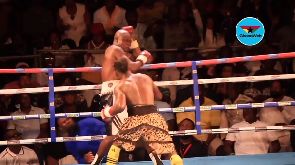 Ghanaian boxer, Bastie Samir, has disclosed on Atinka TV’s ‘Sport Court’ program that he beat Bukom Banku because the women he bullied asked him to do so.

The reigning champion who is mostly referred to as “The Beast” did not spare his opponent Bukom Banku in the ring as he gave the latter the beatings of his life.

Bastie Samir added that he believes Bukom Banku has learnt his lessons and will not dare to lay his hands on any woman ever again.

Bastie Samir knocked down Bukom Banku on Saturday night in round 7.