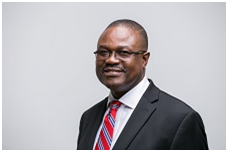 Ernest Akore Represents Ministry of Finance on GRA Board

His name is Ernest Akore. He is a Technical Advisor to the Minister for Finance and was on the last Ghana Revenue Authority (GRA) Board as a Representative – Ministry of Finance, a situation that created a huge fury.

During the vetting of Ken Ofori-Atta, Ernest Akore’s presence on the GRA board came up and it was obvious from the way Mr. Ofori-Atta struggled that there was an unethical bypassing of the regulations, without respect for the law.

Ken Ofori-Atta told the vetting committee that he would fix the problem; but that was a fat lie as he nominated Ernest Akore again to the Ghana Revenue Authority (GRA) Board as a Representative – Ministry of Finance.

According to Section 4 of the Ghana Revenue Authority Act, 2009 (Act 791), the Governing body of the Authority consists of;

(b) the Commissioner-General of the Authority,

(c) a representative of the Ministry not below the rank of a Director,

(d) a representative of the Ministry of Trade and Industry not below the rank of a Director,

(e) the Governor of the Bank of Ghana or a representative of the Governor not below the rank of a Deputy-Governor, and

(2) The President shall appoint the Chairperson and members of the Board in accordance with Article 70 of the Constitution.

According to sources, the position of a Technical Advisor is not a line authority and, therefore, technically does not qualify a person to be on the GRA Board.

It would be recalled that sometime in 2019, Deputy Minister of Finance, Mr. Kwaku Agyemang Kwarteng and Mr. Carlos Kingsley Ahenkorah, Deputy Trade and Industry, were removed from their position as board members of the GRA.

This was communicated to them by the new board chairman, Professor Stephen Adei.

At that time, Professor Adei said he was sacking the two politicians from the board to make way for the Chief Directors of the Ministries they represent to be on the board.