History of the Santrokofi 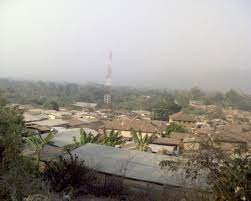 The Santrokofi (Balɛɛ) are aboriginal Guan, iron-smelting, and agriculturalist Sɛlɛɛ-speaking people belonging to the larger Guan ethnolinguistic group found in the Hohoe District of the Volta Region of Ghana. Santrokofi was formerly considered as one of the Central Togo Minorities ethnic groups (Kropp & Ford 1988; Nugent 2010). Santrokofi State is located five to seven miles north of Hohoe, and shares common boundaries with Akpafu to the north and Lolobi to the east. Three major towns that constitute Santrokofi State are Benua, Bume/Abume (which can be found on Hohoe), and Gbodome, on the road to Jasikan.

These languages form a subset of the Kwa subgroup of the Volta-Comoe branch of the Niger-Congo language family. Sɛlɛɛ is closely related to Sɛkpɛlɛ language of the Likpe and Siwu (Siwui) language of the Akpafu and Lolobi (Maddieson and Gordon 1996). The three are closely related and are barely distinguishable from the Guan language spoken by the aborigines of Ghana. The Santrokofi community is largely multilingual and Sɛlɛɛ is used for communication in daily life, whilst Ewe as their second language is used as a lingua franca (Agbetsoamedo 2014:2). Ewe is also used as the language of instruction at the basic level of education. Some Santrokofi also speaks Akan and English.

The expression Sartɛlo Kofi was corrupted to SANTROKOFI by their neighbours and has become the official ethnic name of the Balɛɛ. Thus, whilst the people call themselves Balɛɛ, outsiders refer to them as Santrokofi.

Santrokofi, the Mawu (Akpafu and Lolobi) were the three major groups amongst the GTM that historically specialised in the production of iron and the manufacture of tools and weapons (Pole 2010:44). Mawu (Akpafu and Lolobi) and Santrokofi irons and iron tools attracted traders and people from Dahomey (Fon), Ashanti (Asante), Eweland, and some Guan communities (Pole 1980:504; Otutu Bagyire 1965: 21–22). It is said that traders from Lome and Kete Krachi also came to them for iron and iron tools by not only exchanging food and textiles for hoes, axes, arrows, and spears but also using cowries as currency. The Santrokofi, Akpafu, and Lolobi also travelled to the places of their customers to sell their ironwares. Their iron industry collapsed toward the end of the nineteenth century due to the influx of cheap European steel products. The Santrokofi-Gbodome mine was sunk at a period of which the present generations have no recollection.

Santrokofi lives in the area of comparative high rainfall in a forested upland environment. They produce cash crops such as cocoa, coffee, and to some extent oil. The staples are rice, maize, cassava, and plantain, with some yam, distinct from the Ewe-speaking groups to the south in which hill rice is not grown, but cassava and cocoyam are more common (Pole 2010:48).

Two traditions of origins underpin Santrokofi history of origins. In the first tradition that seeks to portray the Santrokofi as aboriginals in the area, Debrunner (1969) relying on the creation myth of the people contended that the ancestors of the Balɛɛ ascended from the Underworld through a hole at Nkonya Mountain. He narrated, further, thus: “The first to appear was a priest with his drum, then a warrior with his shield and sword, then different men and women, when the priest saw his wife with another man, he struck him and threw his drum back into the hole. Those who still were underground could not ascend anymore” (Debrunner 1969:554-555).

The second tradition of origin that seems to be in sync with that of their fellow Guan groups in the area avers that the Balɛɛ (Santrokofi) trace their ancient lineage to the iron culture in the Kush-Meroe Empire in Ethiopia or “the highlands of Numbia to the northern reaches of Ethiopian highlands” (Agawu 1988; Ogbete 1998). As part of the larger Guan group, they move to Sudan and journeyed to the River Niger enclaves before proceeding to the forest territories of Ghana.

In Ghana, the Balɛɛ (Santrokofi) alongside the other Guan first settled at Afram-Sene-Pru basin town of Gyaman before moving to Nweneme and Duadaso in the Drobo State to search for ore-bearing stones to dig, smelt, and beat it into hoes, mattocks, and farming implements. This affirms Agawu (1988:76) assertion that “after the collapse of the Kush-Meroe Empire, the iron culture spread mainly west and to some extent south, reaching present-day Guinea before turning back through present-day Liberia to present-day Ghana.”

Whilst living in the Afram-Sene-Pru basin, the Akan group from Adanse overran the basin between the periods of 1690-1697 (Ampene 2011). One Kofi, the leader of the Balɛɛ fled with his people alongside other Guans to Atewa Hills near Apapem in Akyem Abuakwa enclaves before moving to Nsawam and finally settling at Akwapim Hills. The peaceful stay amongst the various Guan groups on the Akwapim Hills was truncated by the terrorist reign of the migrant Akan Akwamu State that spreads its power over the mountains from their base at Nyanoase. The cruelty of the Akwamu forced the Kofi to move his people to the eastern banks of the River Volta. Ampene (2011) explained that it was whilst on the Volta waiting to cross that the Balɛɛ kept referring to their great ancestor in an expression, Sartɛlo Kofi, meaning “Our Master Kofi”, in admiration of their leader. ” The expression of reverence, Sartɛlo Kofi was corrupted to SANTROKOFI by their Guan kinsmen.

After staying at the eastern banks of the Volta River, the Balɛɛ (Santrokofi) joined the other Guan groups to cross the Volta around Senkye (Senchi) and journeyed into the mountainous region of Olekpo, close to the Togo border. The group fought wars on their way and they were able to overcome earlier settlers who obstructed them during their attempt to settle on the hilly ground at Olekpo (Ampene 2011). The Balɛɛ (Santrokofi) stayed peacefully at Olekpo hill for many years until the Asante army invaded the whole area from Nkonya to Buem in 1870, under the command of General Adu Bofour.

Initially, the Balɛɛ (Santrokofi) declared themselves as friends of the powerful Asante Kingdom and decided to enter into a peace agreement with Adu Bofour to avoid the kind of torture which the other scattered Guan groups that resisted the Asante suzerainty faced. Ampene (2011) contended that whilst the negotiation for peace was in progress, a certain distinguished, forceful and influential woman unexpectedly poured hot tapioca porridge on the head of one of the Asante soldiers. This scared the minority Balɛɛ (Santrokofi) to retreat en-masse from Olekpo hills. As a result of this incident, the woman was nicknamed “Dzanyikpo” meaning “fall down before you know what happens” (Ampene 2011). Thus, from their relative safe abode on Olekpo hill, the Balɛɛ (Santrokofi) moved to a more open country, mainly because of population pressure.

The Santrokofi made a permanent settlement on the lowlands at Bume in 1905, Gbodome in 1906, and Benua in 1907 (Ampene 2011). They also created a Traditional Area made up of eighteen clans with eighteen divisional chiefs and one paramount chief which rotates within five major clans. The Santrokofi were joined by a group of people who had migrated from Nyagbo between Govie in the south and Tafi in the north

Agawu, V. Kofi. “Music in the Funeral Traditions of the Akpafu.” Ethnomusicology

Agbetsoamedo, Yvonne. “Aspects of the Grammar and Lexicon of Sɛlɛɛ.” (Ph.D.

Bodomo, Adams B. “AN INTERPLAY ON THE STUDY OF GHANAIAN

LANGUAGES.” In African Linguistics at the Crossroads: Papers from

Maddieson, Ian, and Gordon, Mathew. “Notes on the Phonetics of Sele, with

Pole, Leonard Michael. “Decline or Survival? Iron Production in West Africa from the

Seventeenth to the Twentieth Centuries.” The Journal of African History 23, no. 4

___. “The Hammers of Mawu: Ironworking Traditions in the Togo Hills, Ghana.” African