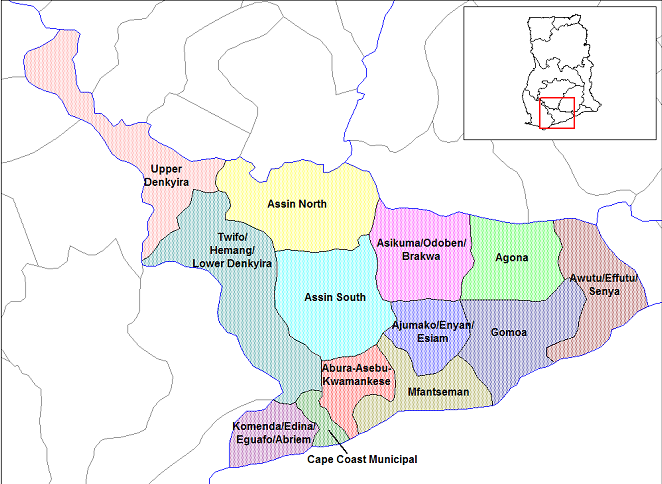 The Abura is agroforestry Mfantse-speaking people that form the sub-set of the larger Akan Bɔrbɔr Mfantse ethnic group residing at the Abura-Asebu-Kwamankese District of the Central Region of Ghana. The Abura were senior members of the Mfantse group and their traditional capital is Abakrampa. Thus, the Chief of Abakrampa is the Paramount Chief of the Abura State. The Abura State shares a border with the Nkusukum State, Anomabo, Asebu, and Kwamankese at several famous historical places in the region. Although Abakrampa is the traditional capital of Abura, the district capital is Abura-Dunkwa.

The Abura State is considered as one of the powerful warrior Mfantse states. Their martial skills are compared with that of an elephant who not even the bog can swallow because of its powerful strength. Hence, their appellation is Fɛntɛnfrɛm! Fɛntɛmfrɛm! Ɔwo botum Oson yi mɛn, Ɔwo botum Osn yi mɛn “Bog! Bog! Can you swallow the Elephant, Can you swallow the Elephant.” The name Abura is an Anglicisation of the Mfantse name Abora. It evolved from wɔrebora bora ‘they traverse through mud without getting stuck.’ Thus, Abora means the people who traverse through mud without getting stuck. They are mud-skippers.

Abura has seventy-seven communities starting from Komantsi Krom near Abandze (the only community of the Abura near the shore) at the South. Akokokrom and Nkwantanan with a boundary near the people of Denkyira at the North.  Nyamoa (Wiomoah) is bounded by Cape Coast in the East and the Assin Kodogya is bounded by Mfantse Nyankomase at the West.  Interestingly the Kakum National Park is in Abura and not in Cape Coast as many visitors are made to know when they visit the Central Region. Some of the Abura towns are Abakrampa, Ohiaba, Mpesedadze, Ekroful, Batanya, Nkramofokrom, Owusor, Abura Dunkwa and many others.

The Abura were amongst the five early Bɔrbɔr Mfantse migrants that emigrated from Tekyiman to Mankessim. They had one of the biggest groups, hence they were called Ntsetse “Ants.” In their group were the Anɔna clan group that went to form Anomabo State with the aboriginal Etsi of Onyinatseadze. Whilst travelling from Bono to the south, Abura moved together with Nkusukum and Ekumfi with Nkusukum forming the “ridge” in the middle whiles the Abura moved on the nyinfa ‘right’ and the Ekumfi on the bɛnkum/atabɛn ‘left’. With this militaristic travelling strategy, the Mfantse came to settle at the back of River Pra and later crossed the Pra to reside at Kwamankɛse.

Crayner (1989) explains that after staying at Kwamankɛse for many years, they moved on to settle at Adowegyir, which was then the settlement of the aboriginal Etsi under their ruler, Okraban Afor (Afful) also known as Nana Akraman. The Bɔrbɔr Mfantse fought the Etsi, defeated them, and drove them out of Adowegyir. After seizing Adowegyir from the Etsi, the Mfantse changed the town’s name to Ɔmankɛsemu ‘Big State’, later anglicised as Mankessim. They made Mankessim their traditional capital; the mortal remains of Oburumankoma (whale), Odapagyan (eagle), and Oson (elephant) were interred in the thicket of trees at the Nkusukum town of Obidan, near Mankessim. The place became in time the “habitat of ghosts [asamanpow] or spiritual powers inhering in nature [abosompow]” ((McCaskie 1990: 135).

Population explosion in Mankɛssim in the middle of 1400s forced many Bɔrbɔr Mfantse groups to move out of their traditional capital. The Abura group, then known as Ntsetse, were led out of Mankessim by Nana Egyir Enyin Kodwo, a powerful hunter who belonged to the Kona Clan. They took to the North-western part and founded their first settlement known as Abura Gyabankrom. From here they built towns such as Abura Nanfo and the Gyase town near Tuakwa and called it Odonkua.  As a result of Egyir Enyin Kodwo’s s leadership, the Abura earned the national appellatives Egyir Enyi Kwadwo, Asafo Abora, Okotupon Amintsiminim “Aggrey Ennin Kojo, Warrior of Abura, The fearful bulky one who overthrows the mighty ones.”

Abura Encounters with Asebu and Etsi

Whilst domiciling in their new settlements and pushing further to expand their territory, the Abura encountered the powerful aboriginal Asebu group who had long preceded them to the coast by sea from Benin. They regarded Abura as interlopers.  Before this period, the Asebufo had also been constantly fighting the Etsi, the aboriginal inhabitants of this country without success. Egyir Anyi Kodwo undertook several wars with Asebu but was not successful for the Asebu had their giant leader, Asebu Amamfi whose enormous strength put shivers down the spines of his opponents.

However, under the leadership of Osahen Apredontwe who succeeded Egyir Enyi Kodwo as the chief of Abura, the entire Bɔrbɔr Mfantse came together with Apredontwe of Abura and Safohen Kwegya Akwa of Anomabo to launch an aggressive war against Asebu. In this war, Asebu was finally defeated and Asebu Amamfi vanished. After the subjugation of the Asebu, Osahen Apredontwe settled near the chief route to the stronghold of the Etsi to break off all communications with the Asebu.  He called the place Asemase meaning “The source of the matter”, which is now corrupted into Adasimandze. Apredontwe moved swiftly to launch an offensive against the allied early inhabitants to avoid receiving a heavy blow at their hands.  Bɔrbɔr Mfantse forces joined Under Apredontwe to turn their victorious arms against the Etsi in a fierce struggle that led to the defeat and ravaging of Etsi territories. The surviving Etsi were allowed to settle on their conquered territories.

After the death of Osahen Apredontwe, Nana Amoa who succeeded him foundered a new town called Abakrampa, which became the present capital of the Abura State. Abakrampa took over the traditional state role from Asemase, which was founded by Osahen Apredontwe with his kinsman Etsiful and others.  The name Abakrampa is derived from Abε “palm” and Krampa “Vulture”, because of the vultures that use to frequent the spot to eat the ripe palm nuts.

Tutuapon is the festival of the Abura State. Tutuapon means ‘the removal of warriors’. This flows from the fact that when the Abura migrated to their present location they met indigenous people (states) that they had to fight, kill, subdue or expel them to exhibit the warlike power and prowess of their fighting spirit. It is for this reason that their ancestors recommended the Tutuapon as the name of their festival. The festival is celebrated annually at Abakrampa, the seat of the Paramount Chief of Abura and Gyabankrom, the first settlement of the people of Abura to mark the removal of warriors from their land. It occurs in September, during which time chiefs of Abura State and the people visit a reserved sacred forest meant for celebration and remembrance of their forefathers to pacify and make a sacrifice for cleansing.  One cow is slaughtered in the forest and another at the divinity stream at Abakrampa known as the Kyekyekum.  The festival attracts people from all walks of life from far and near.  Many people visit Abakrampa during the festival even though it has been kept on a low profile. This day is noted for the grand durbar of the Paramount chief, and Divisional chiefs are carried in the palanquins through the town to the grounds of the Roman Junior High School Park here the elders, men, women, and children’s gaily dressed, assemble to receive them.

Crayner, Joseph Brandford. Bɔrboɔr Kunkumfi: The History of the Migration of the Fantes from Tekyiman to their Present Homes. (Accra; Bureau of Ghana Languages, 1989).

Sanders, James Robert. “The Political Development of the Fante in the Eighteenth and Nineteenth Centuries: A Study of a West African Merchant Society.” (Ph.D. Dissertation, Northwestern University, 1980).