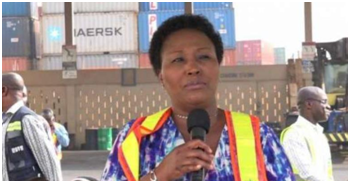 The Ghana Ports and Harbours Authority (GPHA) says it is excited about Vice President Dr Mahamadu Bawumia’s directives for the implementation of joint inspections of goods at the country’s seaports from September 1, this year.

Vice President Bawumia gave the directives which form part of three policies to be implemented by the government as a measure to make Ghana’s ports very competitive in the sub-region.

The other two policies are the removal of all customs road barriers and the directive for Ghana Community Network Services (GCNet) and West Blue to go 100 percent paperless in their transactions at the Ports.

Mrs Esther Gyebi-Donkor, GPHA’s General Manager, Corporate Marketing and Public Affairs, expressed the Authority’s joy at the directive last Wednesday during a day’s workshop for journalists from Accra and Tema.

Mrs Gyebi-Donkor said the implementation of a joint inspection would lead to faster clearing of goods as the current situation of separate inspections by government agencies including the Ghana Standard Authority, Food and Drugs Authority caused unnecessary delay in the clearance process.

She said the GPHA was ready to provide a common place for the agencies to carry out their joint inspection adding that her outfit had already organised a meeting with the stakeholders and a committee formed to see to the implementation of the policy directive.

She, however, stated that she was not sure if all legal issues covering the joint inspection could be met before September 1, 2017, the implementation date.

She added that GPHA was working on a legislation to give it full control and regulatory power over state agencies operating at the Ports as according to her, the PNDC Law 160 was not adequate to control the stakeholders.

Mrs Gyebi-Donkor said the agencies who were authorities on their own always quoted the acts establishing them to defeat efforts by the GPHA to regulate some of their operations at the Ports.

She further said the increase in private participation at the Ports was also posing a challenge to the GPHA explaining that it was difficult getting them to share in the vision of the company.

According to her, most of them were more interested in profit maximisation as most of the shore handlers were hesitant to reduce charges.

She stated for instance that some shipping lines were still charging Value Added Tax (VAT) even though there was a directive against its charging.

Touching on other challenges, she said due to the contract the GPHA signed with the Meridian Ports Services (MPS) to handle all vessels carrying more than 51 containers, sometimes the terminal one would be empty while MPS was choked.

She said even though they had been dialoguing with MPS to release some of the vessels to terminal one, it was not working as they always threatened them with court actions as it was against the concession agreement between them.

Mrs Gyebi-Donkor regretted that GPHA management did not envisage such a problem before including that clause in the agreement.

Mr Amponsah Bediako, Public Relations Officer of the Ghana Standards Authority (GSA), on his part, said it made sense that all the state agencies would operate together and provide a joint inspection.

Mr Bediako said the GSA was ready for the implementation of the directive and urged the GPHA to facilitate its implementation by explaining to the stakeholders the benefits to be accrued from the joint inspection.

The one day workshop which was aimed at educating the journalists on the operations of the GPHA and its stakeholder’s activities saw presentations from the Customs Division of the Ghana Revenue Authority and the GSA.