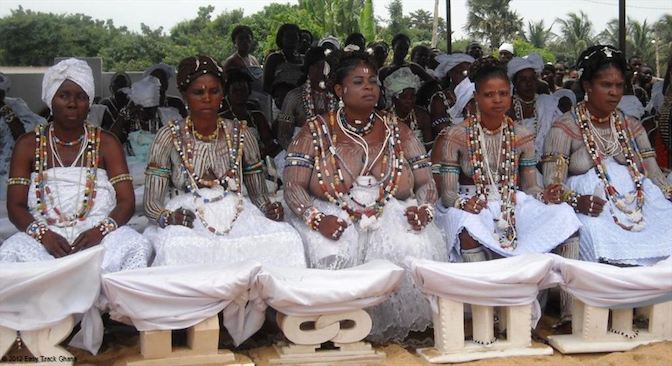 Edina Bronya (Elmina Christmas) is celebrated every first Thursday of the year in January by the people of the Edina Traditional Area in the Central Region of Ghana. Historically, Edina (Edena) or Elmina was an aboriginal Guan settlement that developed out of the ancient Eguafo State. Edina/Elmina became the second place of European landing in 1472 after the Portuguese had earlier landed on the shores of Yabiw in 1471. Currently, the people of Elmina, after many years of socio-political and cultural immersion with the Mfantse now identify themselves as Mfantsefo (Fante people).

Origin of the Festival

It is related that Edina Bronya is a product of globalisation which resulted from Elmina’s contact with Europeans. Hence, this festival is a mixture of indigenous nsagu da afehye “libation making day festival” of the aboriginal Guan-Mfantse Elmina, and the localised Christmas performance inherited from the Dutch. It is said that the Portuguese who reigned on the Gold Coast from 1472 was finally defeated by the Kankan abrofo (Dutch) in 1637. This paved the way for the Dutch to gain control of the Elmina Castle.

Elmina oral tradition asserts that the Dutch who had become the new European power on the coast to strong liking to the celebration noticed nsagu da ritual. The Dutch realised that the nsagu da bore semblance to a New Year festival in their country (Dutch Christmas) where parcels were exchanged on Boxing Day, 26th of December (Ocran 2015). They found that a token of gifts was exchanged between the Chiefs and the Asafomba “war groups/militia groups” and also amongst families during nsagu da. Thus, the Dutch in seeking to identify with the local people attempted a process of enculturation. Consequently, during the period of the Nsagu festival; the Dutch deployed a gift-giving strategy of hanging parcels at reasonable distances on boats at sea and asking the natives who could swim to reach the boat to claim ownership of the gifts. The Dutch borrowed this strategy from the Portuguese before them. This idea of swimming to get a get in Christmas became bronya, which is a contraction of boro/bor “to swim” and nya “get” or “to get.” Thus, Bronya became the Akan-Mfantse/Twi name for Christmas.  The Dutch having superimposed their Christmas festivities over the local nsagu da, the Edina Bronya emerged as the new festival of the people of Elmina.

Time and days of celebration

In Edina Bronye starts with nsagu da meaning libation pouring day. It is celebrated over four days, Thursday to Sunday with a dual purpose; first, to usher in the New Year transcribed as the first Thursday in January of the Western calendar. The second was to thank the ancestors for blessings, protection and to ask the same through prayers ritualized by libation pouring as denoted by the name of the festival.

Ocran (2015) explains that two days before celebrations, which is Tuesday, Alata Manfo (corrupted from Banfo)  Asafo Company or the No.6 parade the streets of the town bearing flags captured from defeated Fante states, specifically Anomabo. There is also a procession with the victory flags accompanied by songs of ridicule to taunt defeated states and dare to come for the flags. The war between Elmina and Mfantse, led by the Anomabo emerged as the result of the support that Elmina gave to the Asante in their southern campaign of 1806/7 in which the Mfantse were defeated. It was Elmina that assisted the Asantes by sharing intelligence with the Asante. This brought Elmina their nickname, Elmina kɔnkɔnsa “Elmina the gossip.” Colonial records record that Jan Niezer, Mulatto from Elmina sold some of the Mfantse captives.

Still on the festival, on Wednesday, Eyampafo Asafo aka No.7 displays the victory war flags captured on the seashore. The belief is that the flags bear the spirit and strength of the specific warrior group. Indeed, the flagbearer is accompanied by two armed men. Following the display of flags on the seashore, one of the flag-bearers protected by spiritual concoctions is shot at to demonstrate prowess. The warrior groups then row across the sea to where the chiefs and elders sit in state to wish them a happy new year. The chiefs in turn respond with warm wishes for the New Year and offer a token of gifts. This action signifies the end of the year.

On Thursday to the first Sunday of the Year, which is the actual libation pouring day or Nsagu da, as early as 4:00 pm, there is wailing by elderly women in each family household, which is a symbolical performance in remembrance of all those who have died. This continues for about an hour and a half. The actual libation pouring rite, then begins at 8:00 or 8:30 pm at the individual households meetings and this is referred to as ekor yɛ do or akor do meaning oneness or unity. The Abusuapanyin calls the names of each dead family member through libation to come and eat and drink with the living. After that individual family members present drinks along with special requests such as those looking for children, cure from specific ailments, and liberation from financial difficulties.

A general durbar is held on Saturday by the chief and elders of the town to discuss development projects for the traditional area. The occasion is then climaxed by merrymaking to usher in the New Year. The festival also epitomises as a site of memory for renewal, periodically refreshing religious history for what was in reality and has to be in vivid conception. As a site of memory, the acceleration of history garnered by value-displacing variables of modernity does not see the light of the day.