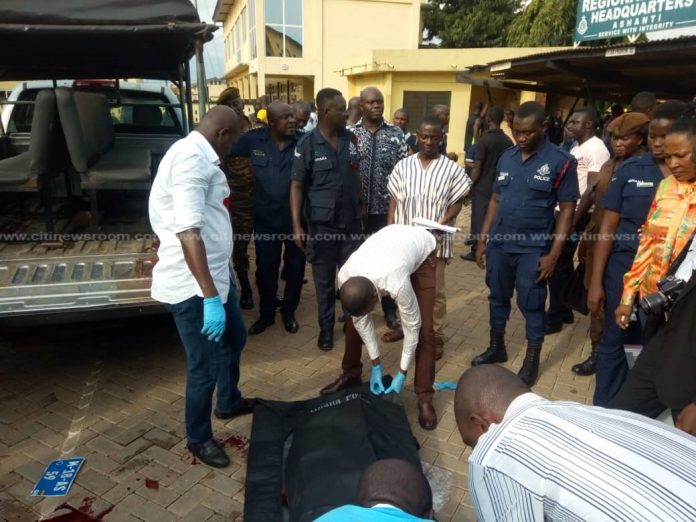 This article was written in 2017 by Lance Corporal Daniel Kwofie with service number 44679 but its contents are still relevant thus publishing it today.

TO THE OFFICE OF THE PRESIDENT

DISCRIMINATORY TREATMENTS AGAINST SECURITY OFFICERS WHO DIE IN LINE OF DUTIES.

Mr. President, my name is Lance Corporal Daniel Kwofie with a service number 44679 but I am popularly known as Ahanta Apemenyimheneba Kwofie III in social media circles and other electronic media outlets. I was formerly stationed at Peki in the Volta Region but has recently been transferred to the National Police Headquarters, Accra. In fact, I am just one and half weeks old at the National Police Headquarters here in Accra.

Certainly around this time last year, I wrote an open letter to your predecessor H.E John Dramani Mahama bemoaning the rate at which police officers die in line of duties with nothing done to their families particularly, the wives and children. It is a cause for worry and I need to be very sincere with you Mr. President. When I heard that you have made a cash donation to the family of Capt. Maxwell Adama Mahama, I was intrigued. I have been pondering on a lot of questions since then. Since I cannot get the opportunity to speak to you one on one, I decided to put my thoughts into writing, hence this letter of mine.

Mr. President, because I have openly been talking about these issues on a regular basis for a long time so I am no longer afraid of premeditated disciplinary actions in the police meant to seal my mouth anymore. I have never been afraid to lose my life as a police officer who has sworn an oath to protect lives and properties so I am not expected to be afraid of being pushed out from the police because I am risking my career to speak on issues that is of interest to the common police officer. If I should go home for speaking the truth, I will just join the second hand clothes sellers here at Kantamanto because that was what I was doing until I joined the police service. It is time we must take responsibilities to address welfare issues that is of paramount interest to the common security officer in which my case is the ordinary police officer. We are not given what we deserve and it is all because we cannot demonstrate or go on strikes due to the tag essential services.

I must commend you for your cash donation of GH¢50 000.00 to the TrustFund established in memory of late Capt. Maxwell Adama Mahama. As a police officer who attended same school with him on the green hills of St. John’s School, Sekondi, I am very much elated to have seen your kind gesture towards a member of our fraternity -OLD SAINTS. In 2003 when I reported at St. John’s School, the late Captain was in final year so I should be happy to see my President donating to his family in hard times like this. As an old student of St. John’s School, I will join the Old Saints to pay our last respect to the late Captain when he is laid in state. I hear he will be given a state burial and that is very good to hear.

Mr. President, I however, have serious concerns about how security officers are treated particularly if one is a junior rank and dies in line of duties. This makes me to see your donation and establishment of the TrustFund in memory of the late Captain as very discriminatory and smacks of unfair treatments particularly to we the junior ranks who are always at the forefronts of risky duties which have tendencies to claim our lives anytime. Many security officers have died in line of duties but no TrustFunds have been established to take care of their wives and children particularly police officers. Why? I will not fault you because your government is relatively new but it is your donation that gingered me to write this long letter of mine. I would expect to see more of these donations and TrustFunds established in memory of junior ranks as well as giving them state burials too. After all, how many senior officers die in line of duties?

The very week that the Captain died, a police officer was killed in Kintampo also in line of duties but it is being treated silently either because he is a junior rank or probably he is from a very poor home. He is not from a generation of senior military or police officers, and not politically and socially connected like the late Captain so no one cares about him. It is sad! Isn’t it? He would silently be taken from the mortuary and be sent to his home town and be buried. If his home town is far like mine, just a handful police officers will follow his corpse to his home town to see where he will be laid to rest. Sometimes a police officer is buried without the usual ritual 21 gun salutes to inform members of the police fraternity who have taken the lead in the world of death that another officer is coming. Is it fair?

For us in the police, regulations 80 of the C.I 76 talks about award scheme for police officers who die in line of duties but Mr. President I must say that since the C.I 76 came into force in 2012, the only benefit we have gotten from it is disciplinary actions, reduction in ranks and dismissals. That is all that we have gotten since the C.I 76 took effect despite working under harsh conditions and most at times beyond the stipulated 8 hours. Even in situations that we work beyond the stipulated 8 hours, we are not paid the adequate monetary compensation mentioned in in regulations 35(2) of the C.I 76. How long should we keep quiet and grumble whilst we serve our country Ghana as police officers? I am not sure we will keep on grumbling in pains like this forever.

Mr. President, I have a request to make. It is time not to establish a TrustFund for only the late military Captain. That is very unfair and discriminatory. Even in the military, I am not sure he is the only military senior officer who has died in line of duty let alone to talk of junior military officers who have perished in dozens in line of duties. Mr. President, the TrustFund should be wide enough to cover every security officer particularly we the police who die almost every day in line of duties. Is it a crime to serve Ghana as junior officer? Must we all be senior officers? The discriminations and unfair treatments against security officers who die in line of duties must stop as a matter of fact. We must be recognized properly whether a police constable or a military captain because we are all serving Ghana in our respective capacities.

To die is not the problem but to die and leave your wife and children to their fate is the problem. We cannot continue to die like chicken whilst our wives and children wallow in abject poverty and most at times, the education of deceased police officers children truncates. Last year, a good number of police officers died in line of duties, and much they could do for them is to in script their names on a cenotaph at somewhere National Police Training School whereas there is a regulations in the C.I 76 instructing that children of deceased police officers who die in line of duties should be catered for up to highest level of education. This is what you should look at Mr. President but not to donate to one and establish a TrustFund in his memory and leave others. This issue should be tackled holistically but not singularly as we are seeing in the case of the military Captain. That is unfair and very discriminatory and makes the whole situation looks like George Orwell’s Animal Farm.

Mr. President, you seriously need to look at this kind gesture of yours towards the family of late Capt. Maxwell Adama Mahama again and extend it to we the “sankwas” in the police who are equally dying in line of duties just as the Captain died almost every day. Mr. President, you must give us hope that from henceforth, if a security officer particularly we the junior ranks in the police die in line of duties, a TrustFund will be established in our memory and if possible be given a state burial too. If nothing at all, our C.I 76 must be fully implemented with a special emphasis on regulations 80 which talks about scholarship scheme for children of deceased police officers who die in line of duties.

Mr. President, I believe our democracy has grown and it is time our laws are reviewed or modified for police officers to form unions or an associations in order to be taken serious because we seemed to have been taken for granted for far too long and that is not in the interest of the country. Due to security concerns when police officers go on strikes and demonstrations, the framers of the law in their wisdom barred security officers from embarking on industrial actions with the firm believe that their needs will be prioritized but it seems we are being taken for a fool. The nation seems to take delight in watching our wives and children suffering when we die in line of duties. It will not go on like this forever. We need to look at those laws again Mr. President.

May the souls of all security officers particularly, police officers who died in line of duties yet no presidential donations and TrustFunds were established in their memories to take care of their wives and children who are wallowing in abject poverty rest in peace. Their crimes were to serve Ghana and got killed in line of duties to leave their wives and children to very unfair fate. It is sometimes very ashame to lay your life down for Ghana particularly if you are police officer.

Mr. President I wish you grace in office as the president of the Republic.