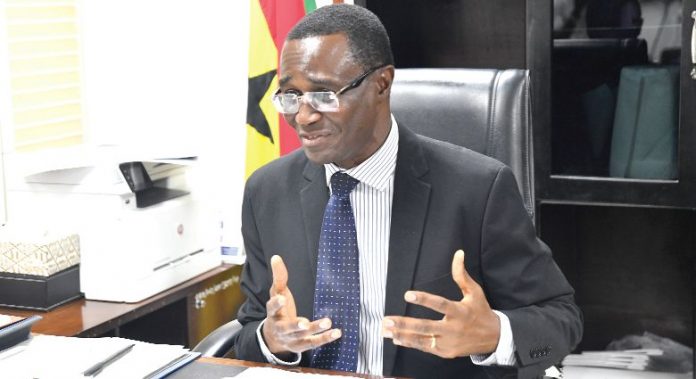 The Commissioner-General of the Ghana Revenue Authority (GRA) Rev. Dr Ammishaddai Owusu-Amoah, has suspended one of his deputies at the Customs Division in charge of Operations.

Commissioner Adu-Kyei is accused of approving transactional values that are described as “low invoice values” covering over 280 electronic products belonging to Sun Electronics.

“In a letter dated December 29th 2021, as DC, Operations (GRA-CD) you approved markdowns or discounts that were analogous to low invoice values that covered over 280 electronic products for Sun Electronics. You approved low invoice values related to rice for importers including WILMAR AFRICA LTD, IMEXCO and FNJ INVESTMENTS, to be effective between December 24th, 2021 and February 22nd, 2022, as well as low invoice value for spaghetti for WESTCO INVESTMENT LTD”, the memo said.

His suspension letter dated Friday, March 25, 2022, also announced that the embattled Deputy Commissioner (DC), has been referred to a Disciplinary Committee for further action.

The action of the Deputy Commissioner, according to the memo sighted by DAYBREAK, is against a GRA Board directive issued on December 16th 2021 that had, with immediate effect,

1)            Forbidden approval of any discounts or markdowns by GRA-Customs CD, euphemistically described as low invoice values, and

2)            Demanded cancellation of all existing approval of low invoice values, discounts or markdowns.

The memo added “Additionally, the above actions by you are not only inimical to GRA’s pursuit of its 2022 revenue target of GH¢80. 3B but they also undermine the Authority’s spirit and efforts as it seeks to fulfil its mandate”.

Interestingly, while Rev. Owusu-Amoah appears to be cracking the whip on even his senior colleagues, he has been caught in the same web of approving transaction that is low in invoice values just like his deputy.

The date for Rev. Owusu-Amoah’s transaction also raised eyebrows as it fell on March 26 which happens to be a Saturday.

But it appears nothing will be done to him simply because he is the boss and has the support of ‘he’ who must be obeyed and the one that calls the shots.

The memo ordering Commissioner Adu-Kyei to proceed on immediate suspension indicated that even though he was queried by the Commissioner-General, his responses were not satisfactory hence the decision to have him appear before a duly constituted Disciplinary Committee.

“The foregoing was the context for the Commissioner-General’s query issued to you dated February 15th, 2022. Your consequent response to the query failed to allay the offence.

“Based on the above circumstances, you are suspended from office with immediate effect as the DC, Operations. You will be required to appear before a duly constituted Disciplinary Committee to further explain your conduct” the two-page statement signed by the Commissioner-General said.

Aside from Rev. Owusu-Amoah, DAYBREAK is reliably informed of a member of the GRA’s Governing Board’s company enjoying transactional valves on the blind side of the board yet is very vociferous in the Commissioner Adu-Kyei saga all because they want to replace him.