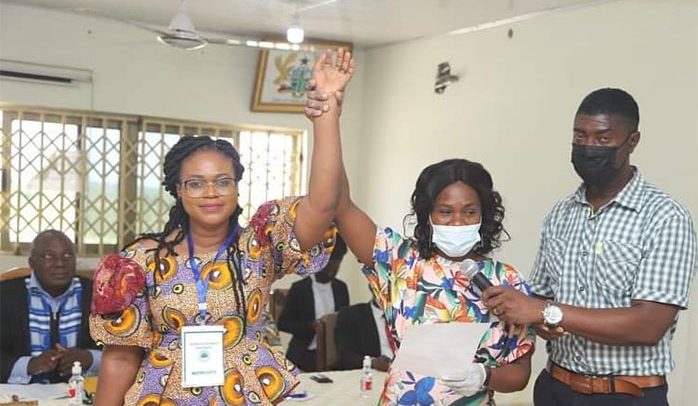 Members of the Adaklu District Assembly in the Volta Region have finally approved the President’s nominee for the position of District Chief Executive (DCE) after two rejections prior.

After voting, she polled 17 ‘Yes’ votes against two ‘No’ votes to secure the position, which has eluded two previous nominees; all males.

She had succeeded on the second attempt, as she suffered a rejection when she was first nominated some weeks ago. The President renominated her, and this time, she was lucky.

The two who were rejected before her nomination were Phanuel Kadey Donkor, immediate past DCE, and Bright Nyatsikor, NPP Constituency Secretary. They were each rejected twice.

It is not clear why the Assembly members rejected the two nominees earlier. The Member of Parliament of the area, Governs Kwame Agbodza had attributed it to lack of broader consultation by the governing party.

Others also point to a lack of reverence for the traditional authorities. While another group believed it was the usual political machinations by the opposition NDC who dominates the role of assembly members.

Madam Kpedekpo’s approval brings to two, the number of female DCEs out of the 18 MDCEs currently in the Volta region.

Swearing in the new DCE on Tuesday in Ho, the Volta Regional Minister, Dr. Archibald Yao Letsa cautioned her never to forget the reason she was appointed; serve the people.

He advised her to be guided by the oath she has sworn and applied herself to the relevant laws and legislations governing the operations of the assembly.

Dr. Letsa further advised her to bring all parties and stakeholders on board in her quest to facilitate development in the area.

Furthermore, she should give reverence to the traditional authorities; who are the custodians of the land and entire Adaklu Traditional Area. He also assured her of the support of the Volta Regional Coordinating Council and the government in developing the people and the area.

Madam Kpedekpo expressed gratitude to the Adaklu people for approving her nomination and assured them that she will remain a servant for all.

She promised to be transparent, accountable, and accommodating to all stakeholders during her time as DCE; to ensure all hands are on deck to develop Adaklu.