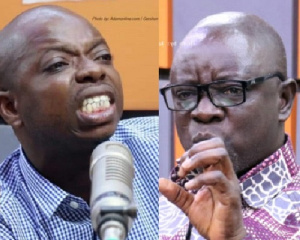 • Among others, he alleges that Mr. Asomah-Cheremeh takes money from perpetrators

The Bono Regional Chairman of the governing New Patriotic Party (NPP), Kwame Baffoe, popularly known as Abronye DC, has alleged that Kweku Asomah-Cheremeh still dabbles in galamsey activities despite calls by President Akufo-Addo to save our environment and water bodies.

According to Abronye DC, the former Lands and Natural Resources Minister has been patrolling galamsey sites to demand monies from illegal miners.

Speaking on Wontumi TV, he claimed that, in one of his dubious missions at Tarkwa in the Western Region, luck eluded the Minister and his squad as he was accosted by the then Municipal Chief Executive (MCE) of Tarkwa-Nsuaem, Gilbert Asmah.

He said the MCE and his taskforce subsequently handed the Asoma-Cheremeh and his team over to the police for the misconduct.

The NPP chairman went on to reveal that shortly after police released the Minister, he went to the President, Nana Addo Dankwa Akufo-Addo and cooked up stories against the MCE that, he [Gilbert Asmah] was involved in galamsey in the area, something that led to the MCE being fired from office.

“I wonder how people can diminish the presidency. It’s not your fault. It’s neither your father nor mother who toured the country to campaign to bring the party to power. All you are seeking to achieve is to amass wealth for yourself whilst the President struggles.

“A cabinet minister, a Peter Amewu successor, was arrested for his involvement in galamsey activities,” angry Abronye DC said.

He continued, “The Tarkwa MCE arrested this Minister who had visited galamsey sites in Tarkwa to take money from the illegal miners. The former MCE and his task force accosted the Minister and his boys. The case is at the Tarkwa Police station. This happened in 2020”, Abronye said.

He, therefore, advised President Akufo-Addo to be wary of the people around him, adding that public servants like Kweku Asomah-Chereme only care about their selfish gains and not the interest of the government and the country.